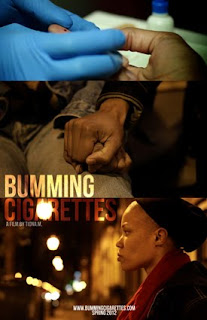 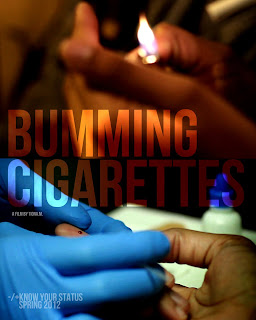 Just wanted to update you all on the progress of Bumming Cigarettes: I'm attaching all of the promo material, as well as the Official Press Release for the film. Please feel free to send out to anyone you feel may be interested in the film!

We are now in the home stretch of the Kickstarter Campaign with only 10 days left to reach our goal. As of today we have 41 Backers who have pledged $2,965 of the $5,000 goal! Which leaves us with a little over $2,000 to raise before March 13. -Monday at Midnight.

So what does all of this mean?! It means we are really good shape for a short film project! We just need to get the word out and encourage folks to either back the film or spread the word! I am confident that Bumming Cigarettes will make the goal so that we can get this baby done!

So far i have received invites to premiere the film in NY-April, Detroit-summer, and a few more film festivals-but the film has to be finished up asap to really get it out there on the road. The film will have strong support on the film fest circuit once its finished so lets work together to get the word out!

So here is what you can do to help out!

Encourage your contacts to Connect with Bumming Cigarettes Online:

If you have some time please tweet, embed to you blog, and share links regarding the campaign at least twice before the end. This will help get the word out a great deal!


thanks and looking forward to celebrating reaching the goal after the 13th!!!
tiona ;)
Posted by quirky at 5:13 PM