More on BUTCH Voices’ adoption of Masculine of...

More on BUTCH Voices’ adoption of Masculine of... 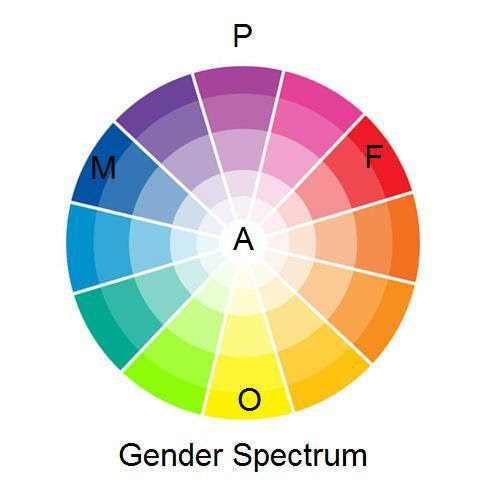 More on BUTCH Voices' adoption of Masculine of Center

"I've read a few places, in response to this BUTCH Voices/Butch Nation stuff, that the word "masculine of center" reinforces the binary, and that gender is more complex than a linear spectrum, etc etc.

Funny, I never think of "masculine of center" as implying a linear, 2D scale, with masculine on one side and feminine on the other. All sorts of shapes have centers, and I tend to think of the gender map as a 3D circle, a galaxy even (though that is much harder to map), or perhaps a shorthand of a 2D circle if I'm trying to simplify it a little more."

My best attempts at a gender spectrum. It's a colour wheel.

Each gender/colour fades down to centre, where I have put A for Agender. I don't really know/haven't come across any people who are pangender, or completely grasped the concept, so I just put it on the opposite place to agender; the outside of the wheel.

Perhaps someone could take this diagram and run with it, because everything I've seen so far tries to fit sex AND gender on the same chart, or is too 2D. This is the best I can do, and I think it could do with some improving.

A point of interest; I think I'm some sort of orange on this.

Um, I'm pretty much in love with this idea.

I feel like I'm yellow, or maybe that gorgeous apple-green