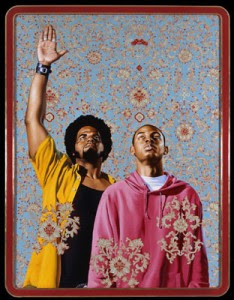 I have been thinking a lot Love + Domination + Black men.

Two weeks ago, I had a fever and couldn't sleep so I was up dumb early, and I decided to re-read bell hook's "The Will to Change" and I found that it offered a straight forward analysis of why Love is the opposite of domination and how patriarchy is the glue that holds this domination puzzle together.

hook's main argument is that when we raise our boys not to feel they grow up to become men who do not know how to Love. #ummp.

I will provide some excerpts from the book below, along with some comments.

Men cannot change if there are no blueprints for change. Men cannot love if they are not taught the art of loving.

Consider this blog post and the other post, on Black masculinity as an effort to open, and continue a conversation about Black people, Black boys + men and feeling.

On Love and Domination

We cannot heal what we cannot feel, by supporting patriarchal culture that socializes men to deny feelings, we doom them to live in states of emotional numbness. We construct a culture where male pain can have no voice, where male hurt cannot be named or healed….Most women do not want to deal with male pain if it interferes with the satisfaction of female desire.

This kind of hit me in the gut because I asked on Twitter about men being allowed to feel. And MZ (if I recall correctly, I didn't screen cap it:/) stated that men can express their feelings to women, but women may not be receptive nor willing to hear it.

This forced me to think about the times in which I did not want to deal with the man when he was in pain.  I then asked myself, did I create the space for such an expression to occur. I stay thinking about it, not just with men, but with my whole crew and with myself as well.

Patriarchy is a political social system that insists that males are inherently dominating, superior to everything deemed weak, especially females, and endowed with the right to dominate and rule over the weak and to maintain dominance through various forms of psychological terrorism and violence.

Gives a whole new meaning to listening to "Bitches ain't shit but ho's and tricks." #ummhmm.

bell hooks on Loving a Man But Resenting His Feelings

Feminist need to reflect on how we treat people too. We human. We make mistakes. We grow. #Ummhmm.

Wow. Talk about we are in this together.com. I Love when writers remind me of this.

The idea that how we raise our boys shapes the kind of men that they will be is incredibly interesting.

Isn't this a more useful discussion than "why heterosexual middle class Black women can't find a 'good' man?" #ummhmm. Peace to Negro men and women who talk about Black women to pay they mortgages and car notes.

Why is it that we force little boys to suppress their feelings then we are surprised that they turn into men who can't feel and simply want to dominate?

For men readers, have you shared your feelings with a woman recently? Was she receptive? How did it turn out?

For women readers, to you give the men in your life space to be in pain and show emotions other than rage/anger? How does this work.

REALLY looking forward to your feedback.

I REALLY liked this. I think it is always hard for people to face the fact that men are just as human as women and the only REAL difference in the way we feel is how comfortable we are about expressing ourselves. That is one of the definite consequences of patriarchy in our society. It has dominated the minds of even some of the most enlightened feminists. I had a conversation with my boyfriend once about if a hypothetical situation in which I did something that would have made him upset. I asked him how he would feel about it. He told me that he would be upset, but he wouldn't tell me. That worried me because I felt that if I did something to hurt him, then I wanted to know so that I did not repeat the offense. It just showed me how men are really not taught to truly "feel". As if being human makes them less of a "man" somehow. So yes, as a woman, I try my best to let my partner know that he can tell me how he feels, no matter the emotion. And you learn to make it work by remembering that people have the right to EVERY emotion they feel. Either it be sorrow, disappointment, or anger. It is not our job to dictate the emotion, but as a friend and/or lover, we should just try to understand, and if possible, empathize with it.
I spoke a little about how we teach our sons in one of my blogs as well... and I really enjoyed your take on this.

@Benita Thank you for taking the time to write a comment.

Seeing the human in the person rather than the race + gender etc...is the challenge and the possibility.