Glitches: The Ballad of Ebony Brown

Glitches: The Ballad of Ebony Brown

via The Crunk Feminist Collective » Glitches: The Ballad of Ebony Brown by jalylah on 7/12/10 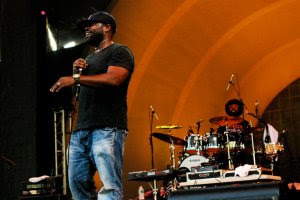 Kool G Rap's "Men at Work" concluded The Roots' Sunday evening set in Brooklyn's Prospect Park.  In the swelter, a paunchy Black Thought perspired through the rap standard while his legendary crew capered Pip-like in the background. A master of breath control, Black Thought expelled not a pant and it was an exhausting exercise. The Roots are serious showmen and I can't say that I wasn't entertained but going to a hip hop concert and hearing that repeated declamation "Men at Work"  prickled as a reminder that for too many "Men at Work" remains hip hop's definition.

I still soared: rapped all the lines to "The Next Movement" and imitated Greg Nice's spry wop atop a metal folding chair during he and Smooth B's impromptu encore performance.  It was only when I had made my way from my old borough to my Harlem digs did my shoulder's shrink. I cued up a DVR recording of the latest episode of the animated series "The Boondocks" titled "The Lovely Ebony Brown." It began with the grandfather, Robert Freeman, committing Facebook hara-kiri (deactivation) because of some misadventures in dating or in his words "batshit crazy bitches." His black male workout buds, Uncle Ruckus and Tom DuBois, took the opportunity to offer relationship council on the next morning's jog. Uncle Ruckus, a self-hating character whose hyperbole dangerously dovetails with prevailing stereotype, unleashed a diatribe against women like me less than three minutes into the episode. Here are a few choice excerpts:

"The key to happiness is to eliminate all black women from your life."

"A black woman's body is the temple of doom."

"Black women don't jog. That way they don't sweat out all them industrial strength toxic avenger chemicals they use to straighten out their hair."

Forgive me for not LOLing. 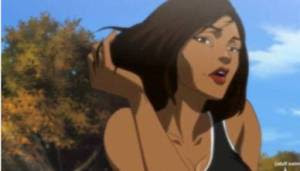 The episode proceeds with Robert crossing paths with a young buxom black woman jogger, the episode's namesake, in contradistinction from Ruckus' broad indictment (although per the comment section of the Onion AV Club's episode review, there is some debate about whether black women jog). In fact, the whole episode Ebony Brown absorbs the insults, brushes off the enmity and proves herself the exception to the cabal of angry ugly unfit broke black woman monsters roaming so much of the world's rampant imagination. Her "perfect" physique (not too Serena Williams), complexion (not too Serena Williams), credit, childlessness, lack of a criminal record are topped by perpetual good humor in the face of all manner of foolishness and on her list of accomplishments is discovering the cure for a devastating disease. In bed with the old flabby Robert, Ebony acquiesces to his preference for lights-off lovemaking by purring "Whatever you like." (Recall that in 1988, "Whatever you like," was a deal breaker #akeem #zamunda)

Robert eventually bungles their relationship with his own insecurity and Ebony lets him down oh so easy after he tracks her down in Malaysia delivering aid to typhoon victims, "You look exhausted and stressed and, I don't know, I don't want to have this effect on you. You don't look happy." Robert returns to his Woodcrest home where Uncle Ruckus, converted by Ebony's cherubic ways, seeks her out to propose. Robert reactivates his Facebook account with renewed faith in select sepia segments of the opposite sex.

This black woman character's transformative influence on the ornery Robert and Ruckus offered little levity to my viewing experience. The episode's whole premise landed as "how does it feel to be a problem?" And Ebony's superhuman contours, eventually begrudgingly appreciated, reinforce the stratospheric bar that has to be met for black women to break even. It takes so much more for us to be in the black, in life and in imagination, than it does for our other sisters. But that's not what struck a nerve, it was Ruckus's opening sermon on our inhumanity. Even in jest, it's tired. It's centuries overplayed. The record has long since been worn down. I want to be able to turn on the TV and not hear so much disparagement directed exclusively at us. It's a downer. How am I to thwart the angry black woman stereotype when television puts me in a sour mood?! (Right now NBC's "Community" is doing it for me a long with reruns of "Seinfeld"-Kramer be damned-and "The Bernie Mac Show").

The novelist and poet Paul Beatty once wrote, "not being ticklish, I see laughter as a learned response and not a reflexive one." Reflecting on his own developing sense of humor, Beatty recalled being the butt of the first joke, a jibe about the darkness of his complexion, he'd ever heard.  I'm the butt of many of the jokes in the television and film I watch.  It's difficult to laugh from that crappy station although not for "The Boondocks" miraculous Ebony Brown who giggles after being called a wildebeest by Uncle Ruckus at dinner with Robert and then picks up the check. Aaron McGruder is a sharp, if sometimey, satirist but I conserved my chuckles last night. The episode prickled as a reminder that the joke is disproportionately on black women. The skin we're in.