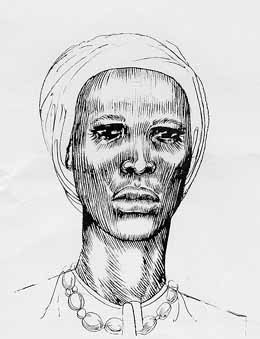 The Maroons were runaways, rebels unwilling to yield to the oppressive forces of slavery. The most famous Maroon military leader was a woman, that's right, I said a woman – Grandy Nanny. The British lived to regret the day they put Nanny on the slave boat.

Nanny was born in Africa (of the Ashanti tribe) and brought to Jamaica as a slave. The Ashanti's were one of the most powerful tribes of West Africa. Their women were held in the highest regard and participated in all facets of tribal life, even fighting and leading battles.

After arriving in Jamaica, Nanny discovered that here, women were no longer the highly respected vessels through which life begins, but instead reduced to laborers and breeders. Of course Nanny wasn't having any of this, so together with her five brothers, escaped to the mountains and began the first of many Maroon communities made up of escaped and freed slaves. This first settlement, nestled in the Blue Mountains of Jamaica, was called Nanny Town.

Now that she was free, besides defending the emerging Maroon locations, she never wavered in her mission to entice other slaves to escape.

Nanny was a military genius and held power for over 50 years, taking on the roles of organizer, nurse, military and spiritual leader. Her soldiers were the first known to use camouflage when fighting and often bested the British because they were better at fighting in the rainy mountains.

In 1734 Nanny Town was bombed with cannons and destroyed, but it is said that Nanny and some of her followers escaped. Discouraged, but not beaten, they rebuilt. Nanny's people resettled on other parts of the island. United, the remaining Maroons and continued to ensure preservation of African culture and knowledge through the coming generations.

A Tribue to Queen Nanny of the Maroons | Exquisitely Black